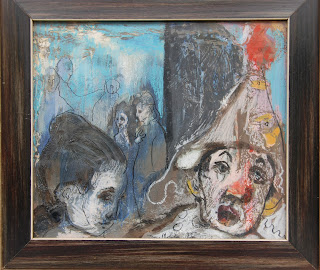 Yesterday I got following comment: I have Tony's Clown and Winnie the Pooh from his Amsterdam period (1960's).
So I asked to send the picture and some info on how the person got the painting: Thus another testimony on Tony Mafia's Amsterdam period.
I quote the text: "Hereby a picture of the Clown. I haven't got a photo of
Winnie the Pooh, as it is currently with my daughter in the UK. I did not
meet him personally, but a friend of mine met him in a bar in Amsterdam
and I bought these two works via him in 63/64. Tony seemed a bit down and out at
the time, so I heard.
I am prepared to sell. Kind regards, Hans.


Tony painted a lot of clowns, he loved the circus. I can't quite tell from the picture whether this is an oil painting or a pastel drawing (which I think it is). Then it would be behind glass.
If you're interested leave an e-mail address in a comment... and I'll get back to you to get  you in touch with Hans. 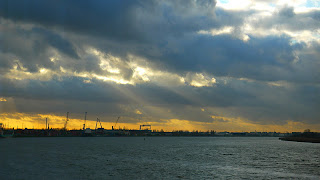 The bridge like structure in background is part of the Cockeril:
The ship repairers
The men working for Cockeril
were special
and strong of will
and working that they did
and strike
and all that was broke they could repair
and partying they did
lorries full of beer and fare
delivered  by the grandpapa
who was from there
food as much as you can think
come on take another drink
but then  - oh man
arrived Japan
the price got too high for hardened steel
life hard and dour
forlorn - forsaken - forgotten
it lays there
faded glory by the stream
loss and
resurrection of a dream
from Hafenklänge-Havenklanken-Sounds of Harbour
by world internet books
Posted by Tumbleweed at 11:08 AM No comments:

Aftermath of war
The mother
bright-eyed with wild
and fuzzy mane
slender with the hunger and the lust for
life
of one that survived the war
She is alive
with a golden claim
upon her hand
a promise of hope and riches in
an across the ocean land
A  vision turned
not a dream
when she became a
woman with a child
Posted by Tumbleweed at 10:31 AM No comments: 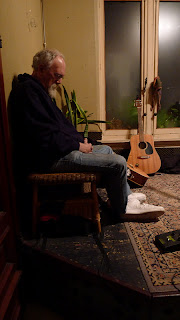 Before the performance, John Sinclair, takes time out to sit and be quiet. He turns inwards and then without  papers or books he speaks, delivers his texts in true San Francisco poetry style. Here defending the Blues.

"humphf"                by  John Sinclair
for big red
they say monk
couldn't play the music. they say,
monk, he limited
by his own vision
& just can't play right. monk,
he too weird. his music
don't sound right, and he gets up
& dances
while he's playing,
like a jackal preacher
at a revival meeting
in an old tent in north carolina.
they say monk sound too much
like a whorehouse piano player
from some pre-harlem ghetto
stuffed with back-woods renegades 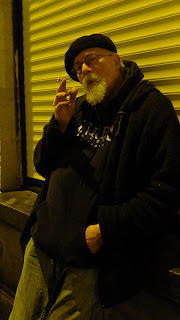 & sporting women & gamblers,
street-level intellectuals. they say
monk, what is that shit
you trying to play, you just can't
do it that way,
you too way out baby,
that stuff ain't you. & monk,
in his infinite knowledge
& wisdom, shoots a grin
from behind the piano,
wiggles his ass on the stool,
lays down another few bars
of utter genius,
turns it over to the tenor player
& rises to dance beside the piano,
some more of that old north carolina boogaloo
*
Even great poets have to enjoy their nicotine  out in the street on a rainy night...
Posted by Tumbleweed at 6:01 AM No comments:

Weltnachtauto - wereldnacht auto
This is a project with 9 poets, each writing two stanzas, some knowing what the others have written, while some poets never knew what the others wrote. Then chance played its part and also a wee bit of composition. Of course there is also a Dutch translation and a German one. It will be part of the 'Harbors of the West' which should be ready by March 21st for Unesco's World Poetry Day. The world premiere was last night read by three different English voices. Thanks Magda. Thanks Lynn.
*

On singing wheels along the harbors, the night sky
installs itself, pens the world; the dashboard guides
along dying skyline, busy quays
where in the fyke of light the fish is brought in
*
Roiling day.
The sea turns color before my eyes.
Cold cries of the gulls more than suffice
to wring out every bit of remorse
and dash them against the rocks.

The wings sing softly: This is a song.
The light goes on, the light goes out
and outside the wind becomes visible and whistles.
*

Rain in my heart
and your consolation brolly.
often heard words
soft to the touch like smooth fur.
*
yeah yeah global ca
that’s the difference between
speaking and living
of you this time with violin waltz
*

he says
water rolling down dough and rock-faced belly.
*
Red is the color of devotion,
how the moon pulls the ocean
how the poor feed the rich
this Love
an involuntary condition.
*
a small child floating around the earth
that is all tha
is so strong at the point of knowing of dying
always always pretty violins with da and ho
*
October 31
the ocean is postcard calm, clouds feathering through layers of blue
smokey, robin’s egg, dark silk, venus flirts with the oncoming night
the moon fattens as one by one fires start to blossom along the shore
*

wind pulls at the car door, yet calmly I drive under the stars
and don’t hear the siren call of blackwaters; something transports me
blinded, numbed, over de darkened roads of past
to when love for the first time rescued me and I your harbor sought

‘Repair the stars...’ The cockpit yawns.
The moon glistens on the sea, cloud city –
The singing sand, time steals on.
Here one makes snow swishing high.

waltz under a red bridge named golden
the sun is always setting.
Sails sailing,
say, have you left your heart...
across the fluid body?

Again descended earthwards, age 33, he lets himself be driven,
Bentley limousine, through godforsaken cities, Armani suit, Dolce &
Gabana sunshades. Cristal champagne uncorked. The lady on the backseat,
Marlene Dietrich legs, Mae West bosom, almost.
*
I give the memory some milk
hoping it wants to come back one day.
There is a dead bird in the distance
near your grown wild waterhole of language.
*
Moon pale night of the soul
and the self upon waves, over roofs
howling crying in rising whisper
mixes mercy with warm worldwide love

Posted by Tumbleweed at 11:44 AM No comments:

Well,  those who read  this blog know it  is also about translating poetry to the highest possible standards.
Literary translators are often underpaid or their name is omitted from the credits. in CEATL's words: Drawing on the experience of its 32 member associations, CEATL notes a general disregard for literary translators’ rights, in addition to shamefully low remuneration. Although all European countries have signed the Berne Convention, in which translations are explicitly acknowledged as original literary works, in many countries translators are not considered authors. This disregard is also reflected in the fact that the translator’s name is generally omitted from the credits, at readings and other events, and is often ignored by the media (press, radio, TV, online). Sometimes the translator’s name is omitted even when their work is used.

Now CEATL ( the European Council of Literary Translators’ Associations) has worked out the Six Commandments of ‘fair-play’ in literary translation, adopted by its General Assembly on 14 May, 2011. So here they are to whom it may concern:
1. Licensing of rights
The licensing of rights for the use of the translation shall be limited in time to a maximum of five years. It shall be subject to the restrictions and duration of the licensed rights of the original work. Each licensed right shall be mentioned in the contract.

2. Fees
The fee for the commissioned work shall be equitable, enabling the translator to make a decent living and to produce a translation of good literary quality.

3. Payment terms
On signature of the contract, the translator shall receive an advance payment of at least one third of the fee. The remainder shall be paid on delivery of the translation at the latest.

4. Obligation to publish
The publisher shall publish the translation within the period stipulated in the contract, and no later than two years after the delivery of the manuscript.

5. Share in profit
The translator shall receive a fair share of the profits from the exploitation of his/her work, in whatsoever form it may take, starting from the first copy.

6. Translator’s name
As author of the translation, the translator shall be named wherever the original author is named.
Posted by Tumbleweed at 12:01 AM No comments: